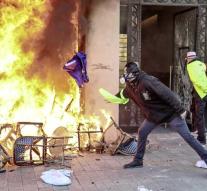 paris - The destruction and looting that has been committed in France since mid-November by the mass protests of the Yellow Hesjes has already cost French insurers at least 200 million euros.

The French Federation of Insurers reported on Tuesday that 175 million of that amount was paid to companies for damage suffered and lost income. The rest of the money went to compensation for damage to cars and houses.