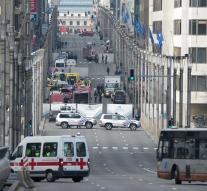 brussels - In the vicinity of the EU institutions close to Maelbeek Metro Station Tuesday reigns dead silence. Rue de la Loi, a very busy thoroughfare along the institutions extends to the offices of the Belgian federal government was not long after the explosion in a subway car locked in the drive.

The alert level has been raised. A large area has been sealed off and offices are inaccessible. All kinds of construction projects in the neighborhood were shut down. All angles are officers and soldiers stationed. In the distance are occasionally hear sirens.

When the European Commission building at half mast flags. Many agencies of European officials have been abandoned. In the international press center opposite is an aid station equipped for injuries.

EU President Donald Tusk and President of the European Parliament Martin Schulz expressed their horror at the attacks, which were at least 34 deaths. EU foreign policy chief Federica Mogherini burst into tears when she heard the news at a press conference in Jordan.

The CDA delegation in the European Parliament announced that,, a number of us shortly before the explosions at subway station Maalbeek arrived or just after the explosions was over walked or cycled. ' The mayor of Brussels said that twenty people were killed and 106 injured. The two attacks at the airport of Brussels demanded definitely fourteen lives.

A large part of public life in the Belgian capital has stalled.