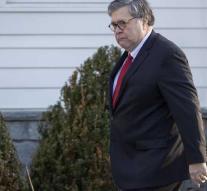 washington - The Democrats in the American House of Representatives have asked Justice Minister William Barr to hand over the report of Special Investigator Robert Mueller by 2 April.

In a letter to Minister Barr, the Democratic Presidents of six committees of the House of Representatives say that the Minister's four-page summary 'is not sufficient for Congress, as an equal part of the government' to support President Trump's actions to investigate.