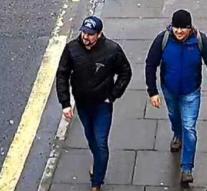 moscow - The Kremlin would seriously consider a British request to allow the two men suspected of the poison-murder attempt at Salisbury. So far, however, London has not reported.

The couple presented themselves Thursday on Russian TV as tourists who came to view the beautiful Salisbury in March. The British government, however, suspects them of wanting to kill the former Russian double spy Sergei Skripal and his daughter Yulia with the deadly nerve poison novitsjok.

Kremlin spokesperson Dmitri Peskov responded on Friday when Moscow would cooperate if the British police wanted to challenge the duo. 'If such a request is made, we will undoubtedly take a good look at it within the possibilities of Russian law. 'Peskov once again underlined that Russia has nothing to do with the Skripal case.