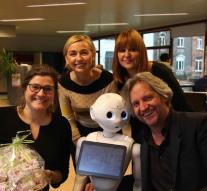 hasselt - The baby is called Fran Pepper, weighs 28 kilograms and is 1 meter 20 tall. She is registered Monday morning in the town hall of the Belgian Limburg Hasselt in the birth register. A first for Belgium because ' considerably oversized maid 'is an anthropomorphic robot.

The robot will 'grow up' on the campus of the school between students and researchers. Fran Pepper is trained as receptionist at the school. In the future PXL still use more robots, but according to Fox is not intended that they eventually replace humans.

Vananroye is excited about the new 'citizen'. ' Fran is very accessible. Before you know it, you're with her in conversation. '