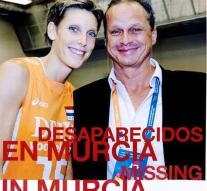 barcelona - The two men got heavier sentences on appeal convicted in Spain for the murder of volleyball star Ingrid Visser and her partner Louis Severein. The provincial Supreme Court in Murcia placed Spaniard Juan C. and Romanian Valentin I. Thursday every forty years imprisonment. In the first instance they received 34 years in prison.

The court confirmed the acquittal of the Spaniard Serafín A., owner of the lemon grove where the mangled remains of the murdered Dutch couple found.

The punishment of the Romanian Constantin S. who was acquitted by a jury of first instance of murder is light weighted. Instead of five months he gets six months in prison for concealment of the crime.

The verdict is partly responding to the concerns of the Public Prosecutor (OM) and the lawyers of the families of the victims. They found too light punishments, because according to them there was no undue delay in the proceedings. The Supreme Court thus agreed.

But the requirement to declare the verdict against Constantin S. Serafín A. invalid was rejected by the court. The prosecution felt that the Board had supported the acquittal of the two men at first instance insufficient.

According to the prosecutor, there came to light enough convincing evidence and clues during the process to also condemn Constantin S. murder and not only for concealment of the crime.