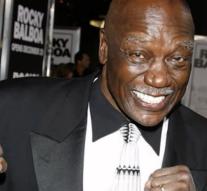 - The heavyweight boxer and actor Tony Burton is deceased after a long illness at the age of 78. That report the American media Friday. Burton was best known for his role as Tony 'Duke' Evers in six Rocky movies. Evers was the trainer of Apollo Creed, the rival Rocky Balboa (played by Sylvester Stallone).

Burton could fall back into the series of boxing films on his own career as a professional heavyweight. He never made a secret of his interest was aroused in acting when he was 3.5 years in prison was because of robbery.

Except in the Rocky series Burton played roles in films like Assault on Precinct 13 and The Shining. He was also seen in several well-known television series like Kojak, The Rockford Files, Quincy, Twin Peaks and The A-Team.