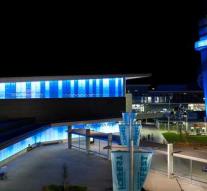 wellington - New Zealand braces for Cyclone Gita, who rages across the Pacific Ocean. The largest airline in the country has canceled all flights to and from the capital Wellington on Tuesday. In Christchurch on the southern island, the state of emergency has been declared, reports The New Zealand Herald.

Schools and several roads on the South Island are closed as a precaution. Due to heavy rainfall, streets in Christchurch have flooded before Gita has landed. Residents of lower areas are advised to seek another accommodation.

Gita raged earlier with wind speeds of up to 275 kilometers per hour over islands in the Pacific Ocean, where the cyclone caused a lot of damage, especially in Tonga. The hurricane has since been watered down to a storm.