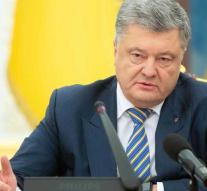 kiev - The Ukrainian president Petro Poroshenko has asked the parliament to declare the state of siege for a period of sixty days.

The reason is the tension that has arisen between Ukraine and Russia after the Russians had fired and seized three Ukrainian navy ships on Sunday. According to Moscow, the ships enter the Sea of ​​Azov in violation of the agreements via the Kerch Strait.