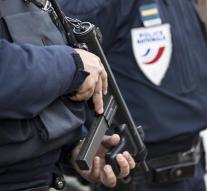 paris - With the arrest of three suspects French police think may have prevented new terrorist attacks. The suspects were arrested in the area of ​​Toulouse. One of them, a man who was known for some time with the police, is suspected that he wanted to strike at New Year's Eve, a police source said Wednesday.

What he was just planning is not yet clear. The man was arrested in Cugnaux, a suburb of Toulouse. In Toulouse itself, the two others were arrested. One of them is suspected that he was preparing an attack on the police suspicion against the other is unknown.

A source at Justice confirmed the arrests and said that there are two separate issues.