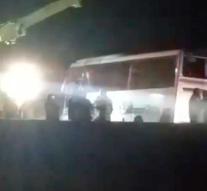 valence - Three people died due to an accident with a bus with supporters of a rugby club. Eleven people were seriously injured, according to French media. The accident was on the A7 motorway at Chantemerle-les-Blés on the night from Saturday to Sunday, just north of the city of Valence.

There were 31 people on board the bus, including 18 minors. The supporters were on the way back from a race in Lyon. The facts of the accident are not clear. The bus has been tilted and slipped a piece over the highway where the crash barrier was hit. Except for the bus, no other vehicles were involved in the accident. The driver is one of the dead.