Home / World / Child gets punishment because he calls the teacher 'mama' 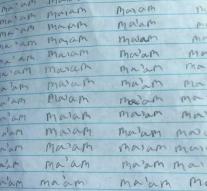 tarboro - A ten-year-old boy received punishment because he called his teacher 'mama'. The teacher was furious and had him write 216 rules. 'Disappointed and ashamed,' the young boy looked when he showed the rules of punishment to his father.

Tamarion Wilson has learned to speak to his parents with sir and ma'am, writes ABC 12. One day he came home with a pimple, and took a piece of paper out of his bag, with the word ma'am on each line four times, on both sides.

The parents had to sign the paper. The boy reported that the teacher had snapped at him that 'if she had something in her hands, she would have thrown it at him.' The boy turned out to have said yes ma'am to her repeatedly, despite warnings.

Teretha Wilson and McArthur Bryant, the parents of Tamarion, explain that their son ended up in hospital this month after an epileptic seizure, including memory loss and hallucinations. The teacher did not know that by the way.