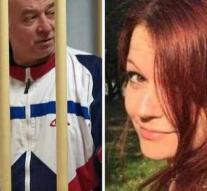 paris - France and Germany have sharply condemned the attack on the former double spy Sergei Skripal and his daughter. This happened after telephone conversations between the British Minister Boris Johnson and his counterparts in the two EU countries.

'We strongly condemn this attack with banned chemical weapons,' said the departing German minister Sigmar Gabriel (Foreign Affairs). 'If it turns out that Russia is behind it, that would be a very serious incident. 'The German suggested calling Johnson to make clear that Berlin is in solidarity with the British government.