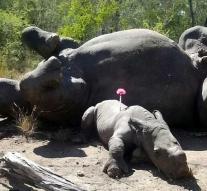 johannesburg - A wounded baby rhinoceros, which watched over his dead mother, was saved by conservationists in the Kruger National Park in South Africa. The white rhino was killed by poachers who were out on her horns, and injured her baby during the struggle.

The white rhino baby, named Arthur, was found next to his dead mother. He had an arrow of a hunter in his ribs and severe injuries to his back and feet.

Arthur was housed in an orphanage for wild rhinos. He is called 'Arthur the brave' (brave Arthur) because he remained loyal to his deceased mother. The creature was probably injured because he was trying to save his mother from the poachers. This is how Daily Mail reports.