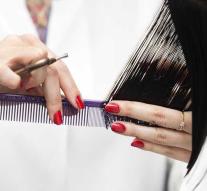 zaventem - A hairdresser from the Belgian town of Zaventem who showered a woman with petrol and threatened to set her on fire was arrested. The 34-year-old Vanessa E. was convinced that the woman had stolen 7,000 euros from her.

That is what the Nieuwsblad reports. Kapster Vanessa E. visited last week a party and had an envelope with seven thousand euros in her handbag. The money was meant for an advertising campaign for hair salons. Later in the evening she discovered to her horror that the money had disappeared from her bag.

A camera had recorded the theft and Vanessa thought to recognize the perpetrator. She was determined not to let it sit and lured the alleged perpetrator to a park to pour her over with gasoline. In addition, Vanessa E. threatened to put the woman on fire if she did not return the stolen money.

The victim promised to give back the amount, but instead she rushed to the police. Vanessa E. was picked up the next day together with her cousin. Both ladies are suspected of imprisonment, threats and violence. The hairdresser may serve the pre-trial detention at home.