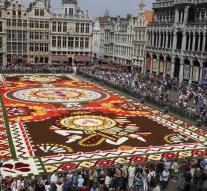 brussels - Two activists from the feminist protest group Femen have damaged a carpet of flowers in Brussels. They did so during a protest against the detention of a migrant family in a closed center. A Serbian mother is sitting there with her four children in anticipation of their expulsion to Serbia.

The two topless women of the action group crawled on the flower carpet on the Grote Markt with a banner. It stated that the detention of children is a scandal. Even with texts on their bodies, the women made it clear that they do not agree with the confinement of the Serbian family, according to the Flemish channel VTM.

The women of Femen have been arrested. They were released after interrogation.

Femen was founded in 2008 in Kiev. The group holds protests- often topless- against sex tourism, homophobia and religious institutions.

Laying a carpet of flowers is a biennial tradition in Brussels.