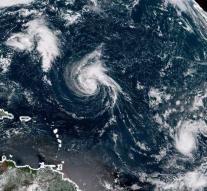 miami - Hurricane Florence is rapidly growing into a large and 'extremely dangerous'; Hurricane. The National Hurricane Center (NHC) in Miami has announced this. The hurricane would reach the mainland of the United States on Thursday. If that happens, there are very likely flooding. Florence now has wind speeds of up to 150 kilometers per hour.

'Make plans now,' Governor Henry McMaster advised the people of South Carolina during a press conference. 'Imagine that a heavy hurricane hits South Carolina in the middle' '. The residents of North Carolina and Virginia are also at risk.

The meteorologists of the NHC follow two more storm areas further on the ocean. Isaac may also stir up hurricane power on Monday and head for the Caribbean