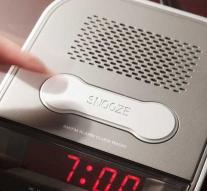 toronto - Two Scottish tourists discovered a hidden video camera in the Canadian Airbnb sleeping room they booked. Shortly after the discovery, the two packed their suitcases again and left they startled.

The 34-year-old Dougie Hamilton was on holiday with his girlfriend. When the man from Glasgow looked at the clock radio after a long day, he noticed something strange: 'At a certain moment I was staring at a clock for about ten minutes. There was something that made me uncomfortable. '

The radio alarm clock had a cord, as telephone chargers can also have: 'I thought that was bizarre. 'In conversation with news site Daily Record, the Scot tells us that he recently saw a video on Facebook about hidden cameras:' I thought: Do I really want to be that crazy person who checks a digital clock for hidden cameras? '

Hamilton decided to pull the plug out of the radio. Then he discovered that the device works on batteries. Then the Scot shoved the front of the clock and discovered the video camera: 'We did not know if the owner was watching. It just felt creepy and we did not want to stay. '