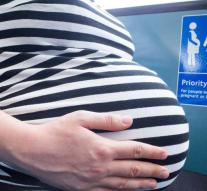 london - The heavily pregnant Brydie Lee-Kennedy was in a very uncomfortable situation last week when a man on the bus refused to move his bag so that she could sit there. The woman then decided to sit on top of the bag and the man's hand.

Daily Mail reports that. For most people getting up for a pregnant woman on public transport is the most normal thing in the world. The Australian Brydie Lee-Kennedy living in London looked strange when the man did not want to give up her last spot on the bus.

'Well, it finally happened in my eighth month of pregnancy,' the woman wrote on Twitter. 'I just sat on a man's hand and bag because he did not want to take them away from the last free chair in the bus. We are now traveling in silence. '

Her tweet received more than 17. 400 'likes' in a short period of time and receives ample support from pregnant women who massively share their own ovarian suffering.