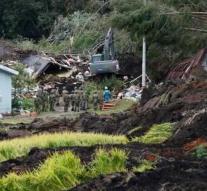 tokio - The death toll due to the powerful earthquake on the northern Japanese island of Hokkaido rose to 44. There are still around 2700 people in shelters, the authorities say.

The earthquake last Thursday had a force of 6.7. Most of the victims fell into Atsuma. There were at least 36 people killed by landslides. On Monday morning the authorities found the body of a missing 77-year-old man, message broadcaster NHK.

The natural violence has wreaked havoc in the area. In total, at least seventy buildings were destroyed, the authorities say. Also, due to landslides, a thick layer of mud remained on roads and rice fields. Public transport in the disaster area is gradually getting under way again.