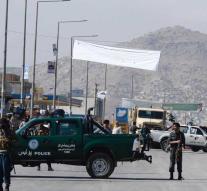 kabul - At least 11 civilians were killed Sunday in an explosion in East Afghanistan when a minivan hit a roadside bomb in Nangarh Province. Six children are among the dead.

According to the United Nations, at least 2789 civilians have been killed since January and at least 5,252 others have been injured.

On Saturday, a suicide bomber blew himself up at a polling station in the Afghan capital Kabul. At least fifteen people were killed. There were also more than 25 wounded.