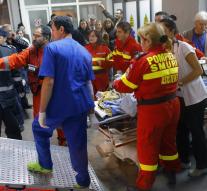 bucharest - A fire in a nightclub in the Romanian capital Bucharest late Friday partly arisen because safety regulations were violated.

These are the Romanian President Klaus Iohannis Saturday during a visit to the site where 27 dead and more than 180 wounded. Among the injured are certainly five foreigners, including one slightly injured Dutchman.

A heavy metal rock band, Goodbye to Gravity, lit during the performance fireworks off the ceiling and the stage set ablaze and caused a massive smoke development. Initially, the singer saw the danger and did not testify according to another joke about the fire, but it spread fast and deadly. The estimated four hundred tried to get away in panic through the exit. Since there was only one, according to eyewitnesses.

Prime Minister Victor Ponta has broken his visit to Mexico and has declared three days of national mourning.