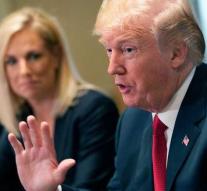 washington - 'Memo-gate' tears Washington apart. After release of a Republican memo about dubious investigative methods from the FBI, it is now up to President Trump to decide whether the Democratic 'counter-memo' should also see the light of day. The Democrats threaten a crisis if Trump prevents the disclosure.

In the meantime, Trump's lawyers are weighing and weighing on the request of the special prosecutor in the Russian investigation, Robert Mueller, to hear the president. Trumps lawyers would not be in favor. According to sources of The New York Times, there is fear that Trump will elaborate for too long and will contradict it.

The lawyers are in discussion with Mueller's team about which questions will be put to the president and whether a part can be answered in writing. Trump had previously indicated that he would like to speak to Mueller to 'dispel all misunderstandings in this witch hunt'.

If Trump does not cooperate, Mueller can try to sue him. According to Trump, the memo from the Republican Congressman Devin Nunes indicates that in the investigation into the Russian interference in the elections and the ties between Team Trump and Moscow, people working on the hand of Hillary Clinton.

Nunes argues that it is the Democrats themselves that used Russian sources, so that the file could be drafted by the British old secret agent Christopher Steele in which Trump was accused without charge of plasseks in Moscow and Trump employee Carter Page was dismissed as a spy for the Kremlin.

The Steele file, which was paid for by the Democrats, was used by the FBI for a court application to be able to follow Page, can be read in the Nunes memo which he drafted after findings of the intelligence committee of the House of Representatives where he chairman of is. Nunes wants Clinton to be investigated and says that more memos with explosive revelations are coming.

What is in the memo of the Democrats is still secret. It is on the desk of Trump who must decide within five days whether it may be made public. The White House says to make the same (security) considerations as with the Republican memo.

The Democrats will probably argue in their memo that businessman Page with his Russian connections had been on the radar of the FBI for some time. They also indicate that the invigilation request for Page has been extended several times by the court, and that is only possible if new information has emerged during the interception.