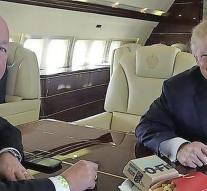 amsterdam - Pete Hoekstra has been nominated to become the new ambassador of the United States in the Netherlands. The vacancy had been open for some time, as former Ambassador, Timothy M. Broas, began his own initiative at the beginning of last year.

Hoekstra is originally a Dutchman. He moved as a toddler with his Groningen parents to the US. He has always stayed a little Dutch because he lives in Holland, Michigan.

Soon Hoekstra will move to The Hague. If so, the US Department of Foreign Affairs has not announced yet.

The Telegraph spoke with Hoekstra this year. Then he wanted to confirm that he was in contact with Team Trump, possibly in connection with an embassy in the Netherlands. From that conversation it turned out that he is not afraid of Dutch directness: 'Allies and friends tell each other the truth. That is important. '