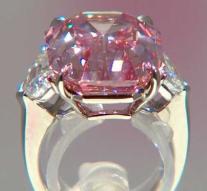 - Auction house Christie's thinks for a pink diamond from the Oppenheimer collection $ 50 million (€ 42 million) to get. The highest price in years at the auction house.

On the 13th of November, the glimmer called Pink Legacy will be auctioned in Switzerland. Wealthy buyers gather at the Four Seasons Hotel des Bergues. Until then, the striking pink diamond is exhibited in London, Hong Kong and New York.

It is in its category one of the most expensive diamonds ever sold. The stone weighs 18.96 carats. At Christie's no such a copy came under the hammer before.

'We could not believe that such a stone existed,' said Warren van Christie's auction director. 'The stone is incredibly clear and beautifully polished, the color and size are breathtaking. '

The previous one was worth € 27 million and was about four carats lighter.