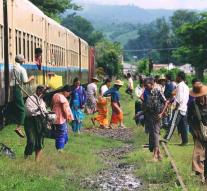 kunming - A demented woman from Thailand has returned home after being missing for seven months after she was found at the end of January in the Chinese city of Kunming. The 59-year-old woman walked 640...

Kaeomanee Arjaw, according to various media, left home last June to visit her son. When she was found in China, she carried a Thai identity card. She lost 20 kilograms of body weight according to her daughter.

The woman stopped at stalls during her walk to ask for food. Meanwhile, Arjaw is back home in Chiang Rai, which borders on Myanmar and Laos.