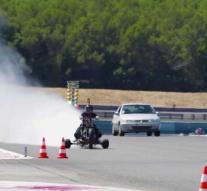 meyheinen - The 36-year-old French speed demon François Gissy was killed during a training ride on a steam-powered tricycle yesterday.

According to the local police, Gissy, in the presence of friends, family and a camera crew, would have wanted to make training runs without permission on a disused military airstrip. He did so on a steam-powered tricycle, with which he had already reached a speed of 261 kilometers per hour.