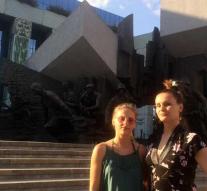 warsaw - The day after the massive protests against the dismissal of the Polish supreme judges, public life in Warsaw calmly continues, as if the separation of powers in the former Eastern Bloc country had not been lifted.

'The government demolishes our democracy in the middle of the summer, just when everyone goes on holiday or watches the World Cup,' sighs Duska Vaclavic, who runs a second-hand shop at Plac Krasinkich.

The Polish Supreme Court stands on this square, and the fighting chairwoman Monika Gersdorf (65) left yesterday with a well-deserved holiday. President Andrzej Duda had told her that she no longer needs to come back, because the Chief Judge was sent together with other colleagues with compulsory early retirement. However, she has the constitutional right to continue for another two years.

'Right here, our partisans fought from the tunnels during the war against the Nazis, during the Warsaw uprising in 1944,' says Vaclavic, who drinks a glass of Tyskie beer among her things. Then she walks to the bronze pillars of the monumental court building, points to the imposing sculpture of death fighting resistance fighters at the door.

District chairman Gersdorf boldly announced not to accept her resignation and to do her job again after the summer, according to the constitution. But the powerful man behind the scenes, party leader Jaroslav Kaczynski of the ruling PiS, is encouraged by party members to force the rebellious woman out of her position by force.

But many Poles have meanwhile been mumbled, have other issues on their heads. 'I have not heard anything about the protests, even on public television. The people in our country have other problems. You know, I'm a fan of the PiS government, they have given all families children 500 zloty (a little over a hundred euros) child benefit ', says Mariusz Dombrowski (35), a cherry seller with a lived face, in front of the Centrum metro station.

Under the smoke of the 237-meter high Palac Kultury, the cultural palace that gave Stalin the Poles after the devastation by the Wehrmacht, teacher Piotr Krajewski stands. With a megaphone, he opposes the nationalist government: 'We have to be careful not to return to communist times, when the judges were not independent either. '

He represents a red-and-white mural of the illustrious revolutionary era, when trade union leader Lech Walesa, after ten years of fierce struggle, in 1989 overcame the communist dictatorship. 'After a quarter of a century of democracy,' Krajewski sighs, 'we are now throwing away what we have struggled with. This is the beginning of the end of our freedom. '