Home / World / Babis sworn in as prime minister next week 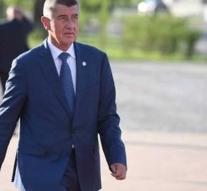 prague - The Czech president Milos Zeman will swear Andrej Babis, the leader of the national populist protest movement ANO, Wednesday as the government leader. That is what Babis said on Thursday after consultation with Zeman. The multi-billionaire, controversial by a fraud complaint, became prime minister after the election victory in October 2017. In January he lost the confidence of the parliament in a vote.

In the Czech Republic, the constitution temporarily gives the President the opportunity to hold a government leader in office without the consent of the people's representatives. That is not allowed as long as no other candidate manages to acquire a parliamentary majority.

Babis must have sufficient (tolerance) support to continue to rule. For this he wants to forge a coalition with the Social Democrats. The communist party is already behind him but will not deliver ministers. The members of the Social Democratic party still have to decide on government participation. It looks like they will say yes in a majority.