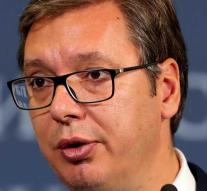 The Serbian president gave a speech on the occasion of the commemoration of Operation Oluja (Storm). During Oluja, the Croatians expelled over 200,000 Serbs who had lived in Croatia for centuries. That was the largest ethnic cleansing in one go during the Balkan wars in the nineties.

'The Croats bombarded rows of refugees, spatuaded the refugees and stoned them,' Vucic looked back at that period. 'They raped and murdered the refugees at their homes or along the streets. '