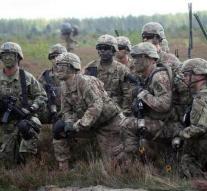 manama - The United States will send two hundred extra troops to Syria to help it in the fight against terrorist organization Islamic State (IS). US Secretary of Defense Ashton Carter announced this Saturday in Manama in Bahrain.

It involves trainers from special forces, advisers and specialists in defusing explosives. The extra troops are in addition to the three hundred men that the US already in Syria. Fighting not participate but support local Syrian fighters.

Carter has been in Bahrain for a conference on security in the Middle East.