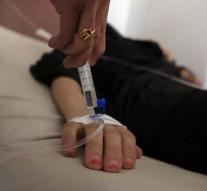 perpignan - A child with symptoms of cholera disease has been admitted to a hospital in France after arriving with a plane from Algeria. The other approximately 150 passengers of the plane, which flew from Oran to Perpignan, were not allowed to leave the aircraft first. But they are still being sent off the plane for research, French internet media reports.

Cholera has emerged on 7 August in Algeria, where the disease had not occurred since 1996. The Algerian Minister of Health, Mokhar Hasbellaoui, has said that the disease is now completely under control. 74 cases have been detected in almost a month. Two patients have died. There are still ten cholera patients in Algerian hospitals according to the authorities.

It is still unclear where this outbreak originated. According to some sources this was in water from the Tipiza region, about 60 kilometers west of the capital Algiers. Cholera is an infectious disease that is rarely fatal nowadays, provided that action is taken quickly. The patient dries out in a short time and loses resistance.