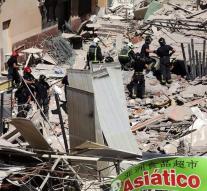 - The collapse of an apartment in Tenerife, has caused a great shock among the residents of Los Cristianos. A local resident said: 'It was like a bomb exploded. It reminded me of when the Twin Towers collapsed. '

The Dutch Etteke de Boer, who works as an interpreter in Tenerife, within three minutes walking distance from the crash site. 'I had nine-thirty brought my daughter to school when I suddenly heard an ambulance, and there was one, and a lot of police cars. I walked to the crash site, which was cordoned off. It was a mess, I counted six ambulances. Emergency services were still hard at searching. 'Certainly they do not know, but it would not surprise her if Dutch would have been present in the building. 'There lived of all, Spaniards, Latinos, Chinese, and also some tourists. But I do not expect that Dutch are involved. '

Oscar Nunez, who works nearby at a notary's office, said: 'I heard a loud explosion, and then the road was one big cloud of dust. 'Restaurant Owner Carlos tells how emergency wore a woman on a stretcher from the building with a collar around. 'I was frightened to death'.