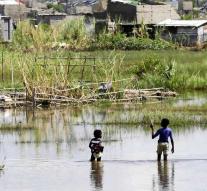 the hague - The Dutch have so far donated more than 860,000 euros via giro 7244 for assistance to the hundreds of thousands of people affected by hurricane Idai in Mozambique, Malawi and Zimbabwe.

More than a week ago, Idai caused a huge havoc in the region around the Mozambican port city of Beira. According to the government, around seven hundred people died. Idai also held a home in neighboring countries Zimbabwe and Malawi.