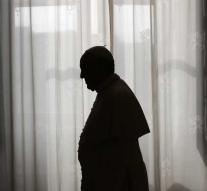 vatican city - Pope Francis, who was confronted with countless instances of sexual abuse of minors by priests in various countries, has written a letter on unprecedented paws about these scandals. He called on all Roman Catholics in the world to help 'eradicate this culture of death'.

The ecclesiastical leader addressed his firm words to 'the people of God' and promised not to shirk any measures to prevent this misuse and its concealment from now on. 'We are aware that the wounds will never disappear. They force us to strongly condemn these atrocities, 'says Francis, who wants the 1.2 billion Catholics to join forces to put an end to these evil practices once and for all.

The papal letter referred, among other things, to the findings of a 'grand jury' in the American state of Pennsylvania, where spiritual leaders took years of abuse against minors. 'Most cases in the report date from a long time ago. This makes it clear that abuse was ignored, concealed or put on the spot all the time. 'Similar cases have recently been denounced in Chile and Australia, among others.