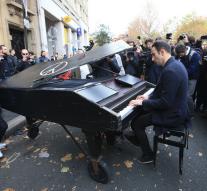 - France has a new national song : "Imagine" by John Lennon gives Parisians hope in dark days and appears en route to the "sound" to be of the revolt against the terror tijstert the city.

Davide Martello was in Germany for the friendly match France- Germany to watch when he was with what was happening in his capital.,null, I knew I had to do something ", he told the British newspaper The Guadiana. He jumped into the car and started the whole night ride to Paris.,null, To comfort and give hope. "

The 34-year-old pianist crawled behind a large, street upright piano and played the song "Imagine." The blood of the heinous attacks was still at the keys. The images quickly went Imagine the world and became very popular. The number is shared on Facebook, turned into pubs and mass sung in streets and squares.

Ironic footnote : In the song John Lennon sings about a perfect world with no religion. The hashtag that Paris was supported internationally in recent days was #prayforparis.