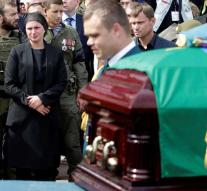 donetsk - For the funeral of the East-Ukrainian pro-Russian separatist leader Aleksandr Zachartsjenko, tens of thousands of people came on their feet. The 42-year-old Zachartsjenko was killed last Friday in a bombing with his bodyguard.

In the rebellious Donbass region, he is the most important figure in the pro-Russian camp that has been killed since the outbreak of the civil war in 2014, the BBC reported. The Kremlin has reacted indignantly to the murder that the government of Ukraine would be behind. Moscow said that further discussion about the conflict is useless.

It was not the first bomb attack that Zachartsjenko was the target of. He survived one in August 2014.

The war in Eastern Ukraine is a result of the dropping of the pro-Russian president Viktor Yanukovich in early 2014. The Yanukovich chosen in 2010 comes from the Donbass region. He was deported during heavy riots in February 2014 and fled to Russia. Many Ukrainians who feel closely related to Russia because of their language, culture or income see their deposition as an extreme right-wing coup.