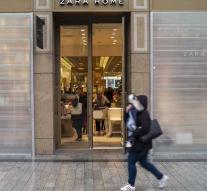 paris - France braces itself for new protests. Around 8000 security forces are deployed in Paris and tourist attractions such as the Eiffel Tower and the Louvre remain closed. The authorities also pick up street stuff that can be used as improvised weapons.

The French capital changed to a battlefield again last Saturday when protesters clashed with the police. Demonstrators also set vehicles on fire and plundered stores. Even the famous Arc de Triomphe had to pay for it. The government has announced that it will deploy 89,000 men nationwide this time to suppress possible riots.