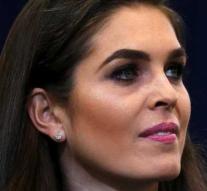 washington - Hope Hicks, the White House Director of Communications and President Donald Trump's prominent advisor, announced on Wednesday that she is resigning. According to The New York Times, she told colleagues in this position that she had achieved everything she wanted.

White House spokeswoman Sarah Sanders later confirmed the departure of Hicks. She gave no reason. The former model (29) joined Trump's election campaign in 2016 without any political experience and grew into one of his confidants.