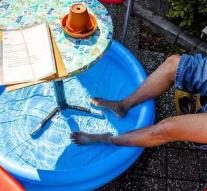 geneva - The year 2018 is probably in fourth place with regard to the average temperature and with that the warming of the earth continues. That says the World Meteorological Organization (WMO).

The twenty warmest years have been registered in the last 22 years, according to WMO. Also this year there were signs of climate change in the form of rising sea levels, warming of water in the oceans and melting polar ice. The extreme weather conditions that followed caused a trace of vandalism on all continents, according to the organization.