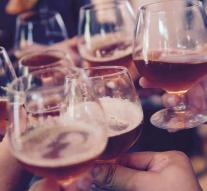 dubai - At least 27 people died in Iran after drinking illegally-fired alcohol. More than three hundred people also experienced symptoms of poisoning. It is one of the most serious of such incidents in a country where consuming alcohol is strictly prohibited.

According to the semi-official news agency ILNA, a spokesman for the Iranian emergency services said that 176 people are still in hospital, spread over five different provinces.

In spite of a ban on alcohol in the Islamic country and the hunt of the police, illegal alcohol is widely available.