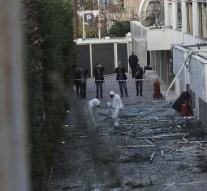 athens - A heavy explosion occurred at the building of the Greek television channel Skai in Athens. Presumably, left-wing extremists are behind the attack.

The attack had been announced earlier in the night from Sunday to Monday by telephone at another television station. No one was injured, Skai reports, the transmitter where the incident took place.

Photos show debris and shards in and near the originally almost entirely glass office building. According to media reports, the explosion would have been caused by about 5 kilos of explosive material. The police are looking for the perpetrators with anti-terrorism teams. The suspicion goes out to Greek left-wing extremists.