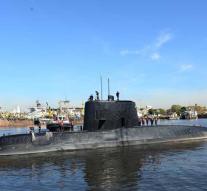 buenos aires - A year after his disappearance, the Argentinean submarine ARA San Juan may have been recovered. This report media in Argentina. The navy would have confirmed the find on Saturday.

The ARA San Juan disappeared on 15 November 2017 after an explosion on board in the southern part of the Atlantic Ocean, some 400 kilometers off the Argentine coast. The ship had 44 crew members.