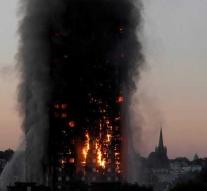 london - A British official admitted that she stole more than 60,000 pounds (almost 67,000 euros) from a fund for survivors of the fire in the Grenfell Tower. The 39-year-old Jenny McDonagh, according to the Public Prosecutor, spent the money on trips to Dubai and Los Angeles and expensive dinners, reports British media.

The woman worked for the borough of Kensington and Chelsea, where more than a year ago 72 people were killed because of the fire in the residential tower. McDonagh is suspected of having used prepaid credit cards intended for survivors or relatives of victims. According to the Public Prosecution Service, she spent tens of thousands of pounds in ten months, including online gambling.

The police arrested McDonagh in early August. According to the prosecutor, it is now also being investigated whether the official has scammed previous employers.