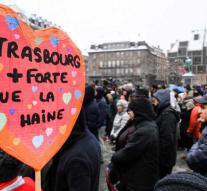 strasbourg - The bombing in Strasbourg last Sunday killed a fifth victim. A Strasbourg musician died, after five days in the hospital, writes his brother on Facebook....

The 29-year-old extremist Chériff Chekatt shot on passersby in the center of Strasbourg on Tuesday. In addition, four people were already killed and twelve people were injured. Chekatt would recently have been radicalized. On Thursday, the fugitive himself was killed by the police.

On Sunday morning the victims were commemorated during a solemn gathering at the Place Kléber in Strasbourg, near the site of the attack.