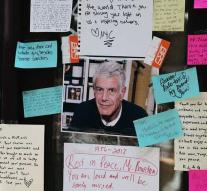 - The fact that life continues after a drama, is now revealed by the apartment of the world famous TV chef Anthony Bourdain after his unexpected suicide comes in the rental.

Many were Bourdain's house for his TV recordings, but he did have a home in New York: a luxury apartment in one of the twin towers of the Time Warner Center. That apartment in the 55-storey building can now be rented for just over fourteen thousand dollars a month, reports TMZ.

For that solid amount, tenants must do it with two bedrooms and two bathrooms. However, the location near Central Park and the view over the Hudson River and the city skyline, viewed through floor-to-ceiling windows, are doing a great job.

And of course the kitchen of the Parts Unknown presenter is equipped with a large kitchen with all the equipment that one can expect from a cook of his stature- he was called 'the rock'n roll star of the kitchen'. But cooking yourself is not even necessary with all the special food shops in the neighborhood. The more time to spend in the spa, the cinema room or on the sun deck of the residential tower.

According to TMZ, many people would like to experience the opportunity to live in the former Anthony Bourdain apartment. Despite his sad end two months ago, when the 61-year-old TV cook was far from that apartment in a small village in France, hanging himself in the bathroom during recordings that had to take place during a 'murderous itinerary'.