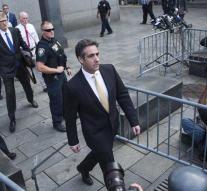 new york - A former associate of Donald Trump, Michael Cohen, has signed an agreement with special prosecutor Robert Mueller and has lied to the Congress.

At the time, he testified to Congressmen about contacts with Russians during Trumps election campaign in 2016. He distributed a written statement containing inaccuracies about a real estate project in Moscow from the Trump Organization.