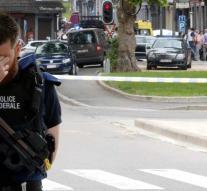 brussels - The shooting in Liège in which three people were killed pushes a wave of indignation and sadness through Belgium. Authorities speak of a terrorist act, Liège is silent for a minute, and all the major politicians today went to the Walloon city.

On Tuesday, a man shot two cops and a passerby dead. Then he hosted a cleaning lady in a school. The man, according to Le Parisien Benjamin H., was released yesterday from prison. Witnesses heard him call 'Allahu Akbar'.

Two victims are agents. The attack will draw a heavy burden on the organization. Colleagues were seen crying on the street.