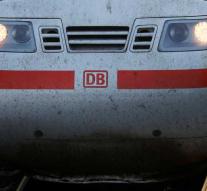 munich - Train traffic has been largely halted throughout Germany due to a strike by train staff. In the state of Bavaria there are no trains on Monday morning. In many other parts of the country there are hardly any trains.

The strikes were announced between 5 a.m. and 9 a.m. Monday morning, but started an hour earlier, German media reports. It is expected that the trains will only run again in the afternoon according to the normal timetable.