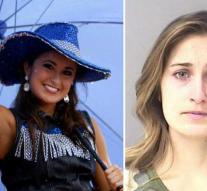 kanawha county - An American teacher and former Miss Kentucky was arrested Friday because she had sent nude photos of herself to a 15-year-old student. When the parents found out that their son had a rather piquant conversation with his former teacher, they turned to the police.

The now 28-year-old married Ramsey BethAnn Bearse, admitted that she had sent the nude photos to her student via Snapchat.

Four years ago, Ramsey won another beauty contest, now she faces a prison sentence of up to twenty years and a fine of 100,000 dollars.

The woman is not allowed to teach anymore and is stuck.